Its upper and anterior surfaces are smooth and curved to fit the under surface of the diaphragm. its posterior surface is irregular in outline.

Organs associated with the liver-

The liver has four lobes. The two most obvious are the large right lobe and the smaller, wedge-shaped, left lobe. The other two, the caudate and quadrate lobes, are areas on the posterior surface.

This is the name given to the region on the posterior surface of the liver where various structures enter and leave the gland.

The portal vein enters, carrying blood from the stomach, spleen, pancreas and the small and large intestines.

Nerve fibres, sympathetic and parasympathetic, enter here. The right and left hepatic ducts leave, carrying bile from the liver to the gall bladder.

Lymph vessels leave the liver, draining some lymph to abdominal and some to thoracic nodes.

The hepatic artery and the portal vein take blood to the liver. Hepatic veins, varying in number, leave the posterior surface and immediately enter the inferior vena cava just below the diaphragm.

The lobes of the liver are made up of tiny lobules just visible to the naked eye. These lobules are hexagonal in outline and are formed by cubical-shaped cells, the hepatocytes, arranged in pairs of columns radiating from a central vein. Between two pairs of columns of cells there are sinusoids (blood vessels with incomplete walls) containing a mixture of blood from the tiny branches of the portal vein and hepatic artery.

This arrangement allows the arterial blood and portal venous blood (with a high concentration of nutrients) to mix and come into close contact with the liver cells. Amongst the cells lining the sinusoids are hepatic macrophages (Kupffer cells) whose function is to ingest and destroy any foreign particles present in the blood flowing through the liver.

the inferior vena cava just below the diaphragm. the system of blood flow through the liver. One of the functions of the liver is to secrete bile. it is seen that bile canaliculi run between the columns of liver cells. This means that each column of hepatocytes has a blood sinusoid on one side and a bile canaliculus on the other. The canaliculi join up to form larger bile canals until eventually they form the right and left hepatic ducts which drain bile from the liver. 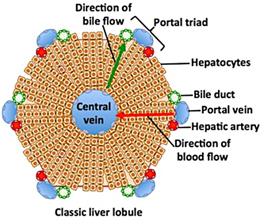 Functions of the liver-

The liver is an extremely active organ. Some of its functions have already been described, and they will only be mentioned here.

Conversion of glucose to glycogen in the presence of insulin, and converting liver glycogen back to glucose in the presence of glucagon. These changes are important regulators of the blood glucose level. After a meal the blood in the portal vein has a high glucose content and insulin converts some to glycogen for storage. Glucagon converts this glycogen back to glucose as required, to maintain the blood glucose level within relatively narrow limits.

Desaturation of fat, i.e. converts stored fat to a form in which it can be used by the tissues to provide energy.

Transamination — removes the nitrogenous portion of amino acids and attaches it to other carbohydrate molecules forming new non-essential amino acids. Synthesis of plasma proteins and most of the blood clotting factors from the available amino acids occurs in the liver.

Breakdown of erythrocytes and defence against microbes-

This is carried out by phagocytic Kupffer cells (hepatic macrophages) in the sinusoids.

Detoxification of drugs and noxious substances-

These include ethanol (alcohol) and toxins produced by microbes.

This follows consumption of alcoholic drinks.

These include insulin, glucagon, cortisol, aldosterone, thyroid and sex hormones.

Synthesis of vitamin A from carotene-

Carotene is the provitamin found in some plants, e.g. carrots and green leaves of vegetables.

The liver uses a considerable amount of energy, has a high metabolic rate and produces a great deal of heat. It is the main heat-producing organ of the body.

The hepatocytes synthesise the constituents of bile from the mixed arterial and venous blood in the sinusoids. These include bile salts, bile pigments and cholesterol.