The pancreas is a pale grey gland weighing about 60 grams. It is about 12 to 15 cm long and is situated in the epigastric and left hypochondriac regions of the abdominal cavity. It consists of a broad head, a body and a narrow tail. The head lies in the curve of the duodenum, the body behind the stomach and the tail lies in front of the left kidney and just reaches the spleen. The abdominal aorta and the inferior vena cava lie behind the gland. 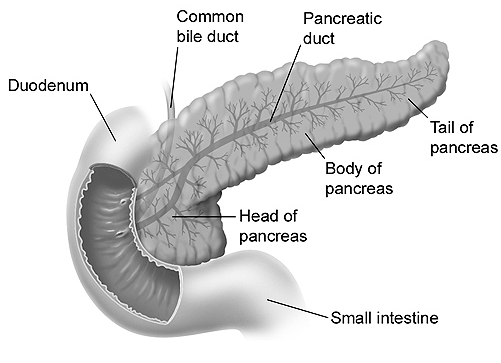 The splenic and mesenteric arteries supply arterial blood to the pancreas and the venous drainage is by the veins of the same names that join other veins to form the portal vein.

Digestive Function- Pancreatic juice plays an important role in the digestion of proteins and lipids. It also has mild digestive action on carbohydrates.

Pancreatic juice plays an important role in the digestion of proteins and lipids. It also has mild digestive action on carbohydrates.

Trypsin is a single polypeptide with a molecular weight of 25,000. It contains 229 amino acids.

Chymotrypsin is a polypeptide with a molecular weight of 25,700 and 246 amino acids. It is secreted as inactive chymotrypsinogen, which is activated into chymotrypsin by trypsin.

Carboxypeptidases are exopeptidases and break the terminal bond of protein molecules. Exopeptidases split the polypeptides and other proteins into amino acids.

Elastase is secreted as inactive proelastase, which is activated into elastase by trypsin. Elastase digests the elastic fibers.

Collagenase is secreted as inactive procollagenase, which is activated into collagenase by trypsin. It digests collagen.

Phospholipase B is also activated by trypsin. It converts lysophospholipids (lysolecithin and lysocephalin) to phosphoryl choline and free fatty acids.

Colipase is a small coenzyme, secreted as inactive procoli pase. Procolipase is activated into colipase by trypsin. Colipase facilitates digestive action of pancreatic lipase on fats.