The urinary system is one of the excretory systems of the body. It consists of the following structures-

Organs associated with the kidneys

As the kidneys lie on either side of the vertebral column each is associated with a different group of structures.

Anteriorly -The right lobe of the liver, the duodenum and the hepatic flexure of the colon

Posteriorly -The diaphragm, and muscles of the posterior abdominal wall

Anteriorly - The spleen, stomach, pancreas, jejunum and splenic flexure of the colon

Posteriorly - The diaphragm and muscles of the posterior abdominal wall.

Components of kidney are arranged in three layers.

Cortex is dark and granular in appearance. It contains renal  corpuscles and convoluted tubules. At intervals, cortical tissue penetrates medulla in the form of columns, which are called renal  columns or columns of Bertani.

Medulla contains tubular and    vascular structures arranged in parallel radial lines. Medullary mass is divided into 8 to 18 medullary or Malpighian pyramids. Broad base of each pyramid is in contact with cortex and the apex projects into minor calyx. 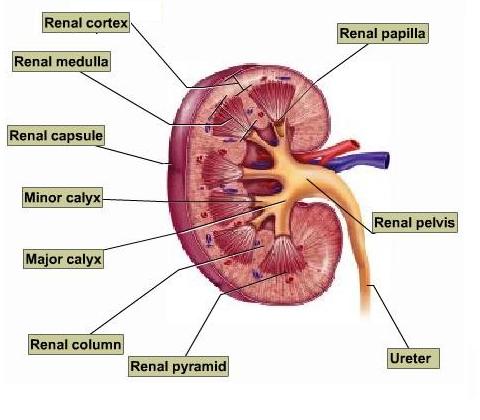 Microscopic structure of the kidney

The kidney is composed of about 1 million functional units, the nephrons, and a smaller number of collecting tubules. The collecting tubules transport urine through the pyramids to the renal pelvis giving them their striped appearance. The tubules are supported by a small amount of connective tissue, containing blood vessels, nerves and lymph vessels.

the structural and functional unit of kidney. Each kidney consists of 1 to 1.3 million of nephrons. The number of nephrons starts decreasing after about 45 to 50 years of age at the rate of 0.8% to 1% every year’

Nephron is formed by two parts

Renal corpuscle or Malpighian corpuscle is a spheroidal and slightly flattened structure with a diameter of about 200 µ. Function of the renal corpuscle is the filtration of blood which forms the first phase of urine formation.

Glomerular capillaries are made up of single layer of endothelial cells, which are attached to a basement membrane. Endothelium has many pores called fenestrae or filtration pores. Diameter of each pore is 0.1 µ. Presence of the fenestra is the evidence of the filtration function of the glomerulus.

Bowman capsule is a capsular structure, which encloses the glomerulus. It is formed by two layers-

Tubular portion of nephron is the continuation of Bowman capsule. It is made up of three parts

B. Loop of Henle-

Loop of Henle consists of

Thick descending segment is the direct continuation of the proximal convoluted tubule. It descends down into medulla. It has a length of 6 mm and a diameter of 55 µ. It is formed by brush bordered cuboidal epithelial cells.

Hairpin bend formed by flattened epithelial cells without brush border and it is continued as the ascending limb of loop of Henle.

Ascending limb or segment of Henle loop has two parts-

A. Role in Homeostasis-

Kidneys excrete the unwanted waste products, which are formed during metabolic activities-

Maintenance of electrolyte balance, especially sodium is in relation to water balance. Kidneys retain sodium if the osmolarity   of body water decreases and eliminate sodium when osmolarity increases.

The pH of the blood and body fluids should be maintained within narrow range for healthy living. It is achieved by the function of kidneys Body is under constant threat to develop acidosis, because of production of lot of acids during metabolic activities. However, it is prevented by kidneys, lungs and blood buffers, which eliminate these acids.

Kidneys secrete  many hormonal substances in addition to erythropoietin and thrombopoietin. Hormones secreted by kidneys

Kidneys play a role in the regulation of blood calcium level by activating  1,25-dihydroxycholecalciferol into vitamin D. Vitamin D is necessary for the absorption of calcium from intestine.

The ureters are the tubes that convey urine from the kidneys to the urinary bladder. They are about 25 to 30 cm long with a diameter of about 3 mm. The ureter is continuous with the funnel-shaped renal pelvis. It passes downwards through the abdominal cavity, behind the peritoneum in front of the psoas muscle into the pelvic cavity.

The ureters consist of three layers of tissue-

The urinary bladder is a reservoir for urine. It lies in the pelvic cavity and its size and position vary, depending on the amount of urine it contains. When distended, the bladder rises into the abdominal cavity.

The bladder is roughly pear-shaped, but becomes more oval as it fills with urine. It has anterior, superior and posterior surfaces. The posterior surface is the base. The bladder opens into the urethra at its lowest point, the neck. The peritoneum covers only the superior surface before it turns upwards as the parietal peritoneum, lining the anterior abdominal wall. Posteriorly it surrounds the uterus in the female and the rectum in the male. 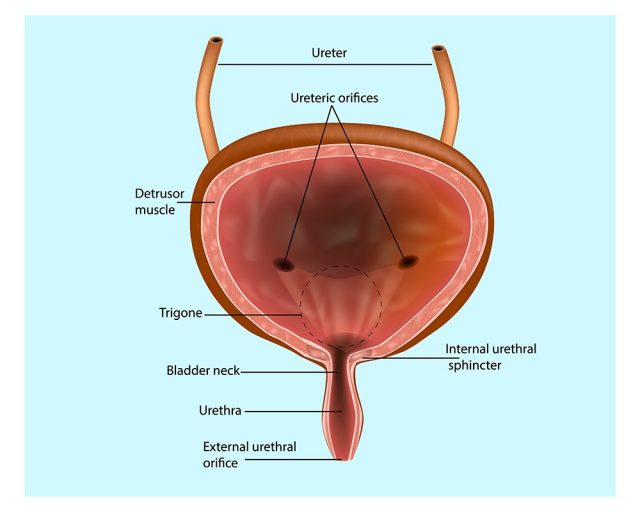 The bladder wall is composed of three layers-

The urethra is a canal extending from the neck of the bladder to the exterior, at the external urethral orifice. Its length differs in the male and in the female. The male urethra is associated with the urinary and the reproductive systems. 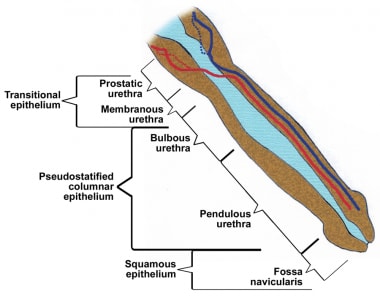 The female urethra is approximately 4 cm long. It runs downwards and forwards behind the symphysis pubis and opens at the external urethral orifice just in front of the vagina.

Its walls consist of three layers of tissue-