The pelvis is a basin-shaped structure that supports the spinal column and protects the abdominal organs, the knowledge of the female pelvis is very essential for the midwife.

1- The primary function of the pelvis is to allow movement of body.

3-The pelvis contains and protects the reproductive organs as well as the bladder and rectum.

4- While sitting, the weight of the body is taken on by ischial tuberosities.

5-  A woman’s pelvis is adapted for childbearing in that in comparison to the male pelvis the brim is rounder and wider.

6- Pelvis help in transmitting weight of the body to the legs.

Bones of the pelvis-

The innominate bone composed of three parts that is -

At the other end of the Iliac crest are two similar points called the Posterior superior and Posterior inferior iliac spines.

The Ischium -is the thick lower part. It has a large prominence known as the Ischial Tuberosity on which the body rest when sitting. behind and a little above the tuberosity is an inward projection, the Ischial spine. In labour the station of the fetal head is estimated in relation to the ischial spines.

2- The ring pessary should be applied above this level for treatment of prolapse.

3-Internal rotation of head occurs when head reaches at this level.

4- Pudendal nerve block is carried out at this level.

5- The levator ani muscles are situated at this level.

6- Head is considered engaged when vault is felt vaginally at or below this level.

It has a body and two oar-like projection, the superior ramus and the inferior ramus. the two pubic bones meet at the symphysis pubic and the two inferior rami for the pubic arch, merging into a similar ramus on the ischium. the space enclosed by the body of the pubic bone, the rami and the ischium is called the Obturator foramen.

The sacrum is wedge-shaped bones consisting of five fused vertebrae. The upper border of the first sacral vertebra just forward and is known as Sacral promontory. This is an important pelvis landmark. the anterior surface of the sacrum is concave and is referred to as the hollow of the sacrum. laterally the sacrum extends into a Wing or ala. The sacrum is perforated by four sets of holes or foramina through which the sacral nerves pass.

The coccyx is a vestigial tail. It consists of four fused vertebrae, forming a small triangular bone. During labour the coccyx move backward to enlarge the pelvic outlet allowing more space for the passage of the fetus.

As the inlet is the brim of the pelvis, the circumference of the inlet is formed by the bony landmarks mentioned previously.

It is almost round (gynecoid) with the anteroposterior diameter being the shortest. Other different shapes of the inlet are anthropoid, android and platypelloid.

It is an imaginary flat surface bounded by the bony points mentioned as those of the brim. It is not strictly a mathematical plane and is, therefore, often referred to as superior strait. 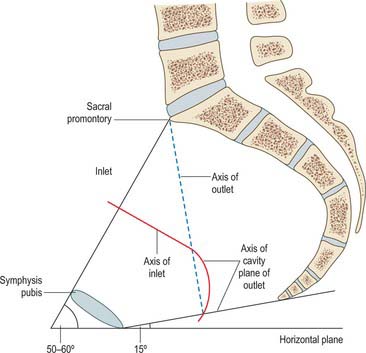 When the angle of inclination is increased due to sacralization of fifth lumbar vertebra, it is called high inclination. High inclination has got obstetric significances:
1. Tere is delay in engagement because the uterine axis fails to coincide with that of inlet
2. It favors occipitoposterior position
3. Tere is difculty in descent of the head due to long birth canal and fat sacrum interfering with internal rotation.
The angle of inclination may be lessened in case of lumbarization of first piece of sacral
vertebra and is called low inclination. It has got no obstetric significance. It actually facilitates early engagement.

Sacral angle- It is the angle formed by the true conjugate with the first two pieces of the sacrum. Normally, it is greater than 90°. A sacral angle of lesser degree suggests funnelling of the pelvis.

Axis- It is a mid-perpendicular line drawn to the plane of the inlet. Its direction is downward and backward. When extended, the line passes through the umbilicus to coccyx. It is important that the uterine axis should coincide with