Heart is a muscular organ that pumps blood throughout the circulatory system. It is situated in between two lungs in the mediastinum. It is made up of four chambers, two atria and two ventricles.

Organs associated with the heart-

Left side of the Heart-

Left side of the heart has two chambers, left atrium and left ventricle.

Layers of the Heart-

Heart is made up of three layers of tissues-

Pericardium is the outer covering of the heart. It is made up of two layers-

The space between the two layers is called pericardial cavity or pericardial space and it contains a thin film of fluid.

Parietal pericardium forms a strong protective sac for the heart. It helps also to anchor the heart within the mediastinum.

Parietal pericardium is made up two layers-

Inner visceral pericardium lines the surface of myocardium. It is made up of flattened epithelial cells. This layer is also known as epicardium.

This forms the lining of the myocardium and the heart valves. It is a thin, smooth, glistening membrane which permits smooth flow of blood inside the heart. It consists of flattened epithelial cells, continuous with the endothelium that lines the blood vessels.

Valves of the Heart-

There are four valves in human heart. Two valves are in between atria and the ventricles called atrioventricular valves. Other two are the semilunar valves, placed at the opening of blood vessels arising from ventricles, namely systemic aorta and pulmonary artery. 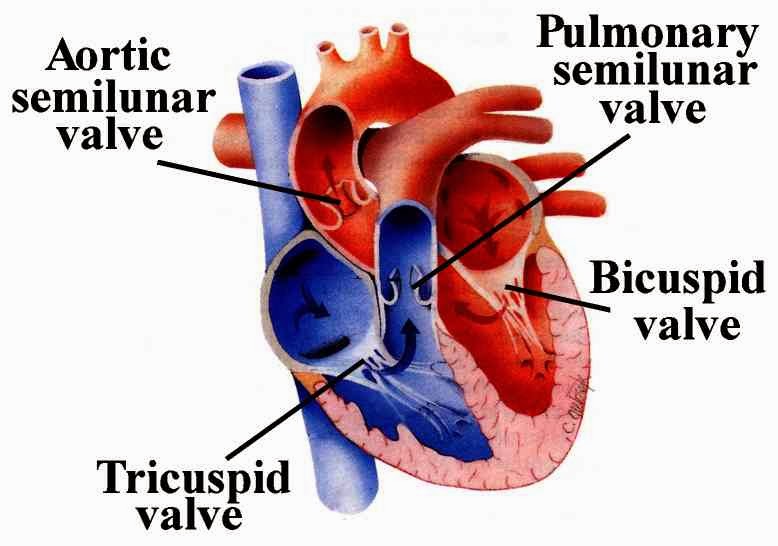 Blood supply to the heart

The heart is supplied with arterial blood by the right and left coronary arteries which branch from the aorta immediately distal to the aortic valve.The coronary arteries receive about 5% of the blood pumped from the heart, although the heart comprises a small proportion of body weight. This large blood supply, especially to the left ventricle, highlights the importance of the heart to body function.

Most of the venous blood is collected into several small veins that join to form the coronary sinus which opens into the right atrium. The remainder passes directly into the heart chambers through little venous channels.

Conducting system of the heart

The heart has an intrinsic system whereby the cardiac muscle is automatically stimulated to contract without the need for a nerve supply from the brain. However, the intrinsic system can be stimulated or depressed by nerve impulses initiated in the brain and by circulating chemicals including hormones. There are small groups of specialised neuromuscular cells in the myocardium which initiate and conduct impulses causing coordinated and synchronised contraction of the heart muscle.

This small mass of specialised cells is in the wall of the right atrium near the opening of the superior vena cava. The SA node is the 'pace-maker' of the heart because it normally initiates impulses more rapidly than other groups of neuromuscular cells.

This small mass of neuromuscular tissue is situated in the wall of the atrial septum near the atrioventricular valves. Normally the AV node is stimulated by impulses that sweep over the atrial myocardium. However, it too is capable of initiating impulses that cause contraction but at a slower rate than the SA node.

C. Atrioventricular bundle (AV bundle or bundle of His)

This is a mass of specialised fibres that originate from the AV node. The AV bundle crosses the fibrous ring that separates atria and ventricles then, at the upper end of the ventricular septum, it divides into right and left bundle branches. Within the ventricular myocardium the branches break up into fine fibres, called the Purkinje fibres. The AV bundle, bundle branches and Purkinje fibres convey electrical impulses from the AV node to the apex of the myocardium where the wave of ventricular contraction begins, then sweeps upwards and outwards, pumping blood into the pulmonary artery and the aorta.

Cardiac cycle is defined as the succession of (sequence of) coordinated events taking place in the heart during each beat. Each heartbeat consists of two major periods called systole and diastole.

Events of cardiac cycle are classified into two

When the heart beats at a normal rate of 72/minute, duration of each cardiac cycle is about 0.8 second.

The individual is not usually conscious of his heartbeat, but if the ear or the diaphragm of a stethoscope is placed on the chest wall a little below the left nipple and slightly nearer the midline the heartbeat can be heard. Two sounds, separated by a short pause, can be clearly distinguished. They are described in words as 'lub dup'. The first sound, 'lub', is fairly loud and is due to the closure of the atrioventricular valves. This corresponds with ventricular systole. The second sound, 'dup', is softer and is due to the closure of the aortic and pulmonary valves.

Cardiac output is the amount of blood pumped from each ventricle. Usually, it refers to left ventricular output through aorta.

A.Stroke volume- Stroke volume is the amount of blood pumped out by each ventricle during each beat. Normal value: 70 mL (60 to 80 mL) when the heart rate is normal (72/minute).

B. Minute volume- Minute volume is the amount of blood pumped out by each ventricle in one minute. It is the product of stroke volume and heart rate-