Thyroid is an endocrine gland situated at the root of the neck on either side of the trachea at the level of the 5th, 6th and 7th cervical and 1st thoracic vertebrae. It has two lobes, which are connected in the middle by an isthmus. It weighs about 20 to 40 g in adults. Thyroid is larger in females than in males. The structure and the function of the thyroid gland change in different stages of the sexual cycle in females. Its function increases slightly during pregnancy and lactation and decreases during menopause.

The lobes are roughly cone-shaped, about 5 cm long and 3 cm wide.

The venous return is by the thyroid veins which drain into the internal jugular veins.

Two parathyroid glands lie against the posterior surface of each lobe and are sometimes embedded in thyroid tissue. The recurrent laryngeal nerve passes upwards close to the lobes of the gland and on the right side it lies near the inferior thyroid artery. 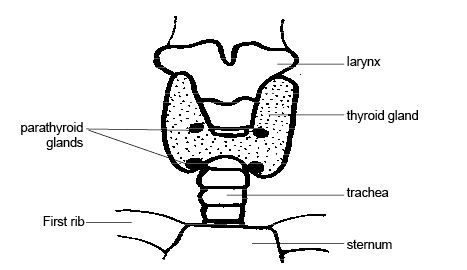 T4 is otherwise known as thyroxine and it forms about 90% of the total secretion, whereas T3 is only 9% to 10%.

Degradation of thyroid hormones occurs in muscles, liver and kidney.

For the synthesis of normal quantities of thyroid hormones, approximately 1 mg of iodine is required per week or about 50 mg per year.

Thyroid gland is unique in this, as it is the only endocrine gland that can store its hormones for a long period of about 4 months. So, when the synthesis of thyroid hormone stops, the signs and symptoms of deficiency do not appear for about 4 months.

Thyroid hormones have two major effects on the body-

Calcitonin This hormone is secreted by the parafollicular or C-cells in the thyroid gland. It acts on bone and the kidneys to reduce the blood calcium (Ca2+) level when it is raised. It reduces the reabsorption of calcium from bones and inhibits reabsorption of calcium by the renal tubules. Its effect is opposite to that of parathyroid hormone (PTH, parathormone), the hormone secreted by the parathyroid glands. Release of calcitonin is stimulated by an increase in the blood calcium level. This hormone is important during childhood when bones undergo considerable changes in size and shape.

Hyperthyroidism is caused by- Signs and Symptoms of Hyperthyroidism 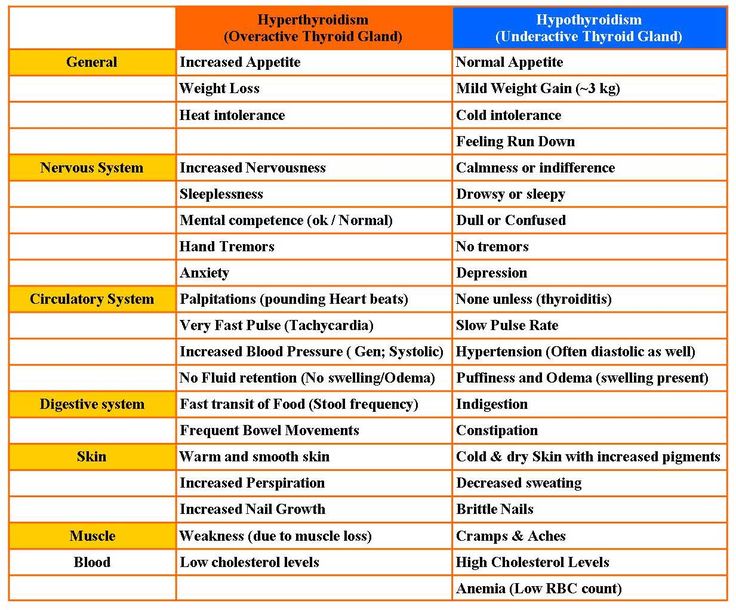 Decreased secretion of thyroid hormones is called hypothyroidism. Hypothyroidism leads to myxoedema in adults and cretinism in children.

Myxedema is the hypothyroidism in adults, characterized by generalized oedematous appearance. Common cause of myxoedema is the autoimmune disease called Hashimoto’s thyroiditis.

Signs and symptoms of myxedema-

Cretinism is the hypothyroidism in children, characterized by stunted growth.

Cretinism occurs due to congenital absence of thyroid gland, genetic disorder or lack of iodine in the diet.

Goiter means enlargement of the thyroid gland. It occurs both in hypothyroidism and hyperthyroidism.

Toxic goiter is the enlargement of thyroid gland with increased secretion of thyroid hormones, caused by thyroid tumor.