This leads to a limitation of the flow of air to and from the lungs causing shortness of breath. 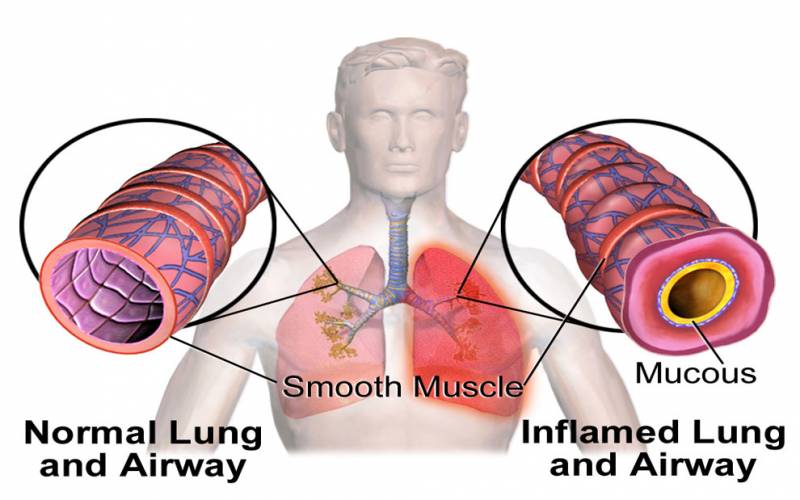 In COPD, less air flows in and out of the airways because of one or more of the following

Exposure to workplace dusts found in coal mining, gold mining, and the cotton textile industry and chemicals such as cadmium, and fumes from welding have been implicated in the development of airflow obstruction. Exposure of these irritants causes the airway to be hyper responsive.

Genetics-Alpha 1-antitrypsin deficiency is a genetic condition that is responsible for about 2% of cases of COPD. In this condition, the body does not make enough of a protein, alpha 1-antitrypsin. Alpha 1- antitrypsin protects the lungs from damage caused by protease enzymes, such as elastase and trypsin, that can be released as a result of an inflammatory response to tobacco smoke.

Chronic bronchitis is characterized by the following 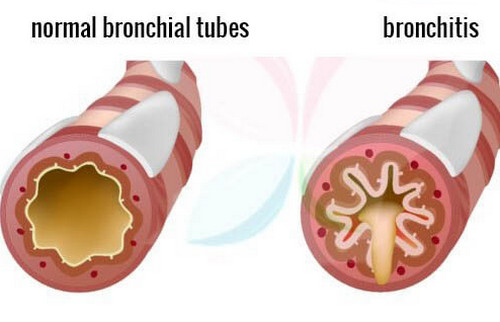 There are three types of emphysema

Centriacinar (centrilobular) emphysema the most common type produce destruction in bronchioles usually in the upper lung region. Inflammation begins in the bronchioles and spread peripherally but usually the alveolar sac remains intact. This form of emphysema occurs most often in smokers. 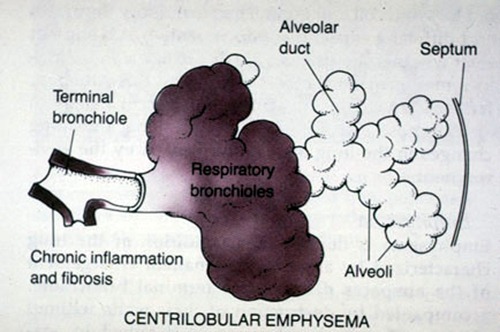 Panacinar emphysema destroys the entire alveolus and most commonly involves the lower portion of the lung. This form of disease is generally observed in individuals with ATT (Alpha-1 antitrypsin deficiency) deficiency. Paraseptal or distal acinar emphysema primarily involves the distal airway structures alveolar ducts and alveolar sacs. The process is localized around the septa of the lung or pleura. It is believed to be the likely cause of spontaneous pneumothorax. Blood tests can help determine if symptoms are being caused by an infection.

An arterial blood gas test will measure the amount of oxygen in blood. This is one indication of how well lungs are working. This can help doctor determine how severe COPD is and whether need oxygen therapy.

A CT scan is a type of X-ray that creates a more detailed image than a standard X-ray. Whichever type doctor chooses, an X-ray will give a picture of the structures inside chest. These include your heart, lungs, and blood vessels. Your doctor will be able to see if client has evidence of COPD. If symptoms are being caused by another condition such as heart failure, the doctor will be able identify that as well.

Doctor may order a sputum examination, especially if the client has a productive cough. Sputum is the mucus the client cough up. Analyzing sputum can help identify the cause of breathing difficulties and may rule out some lung cancers. If there is a bacterial infection, it can be identified and treated.

The doctor might request an ECG to determine if your shortness of breath is being caused by a heart condition. 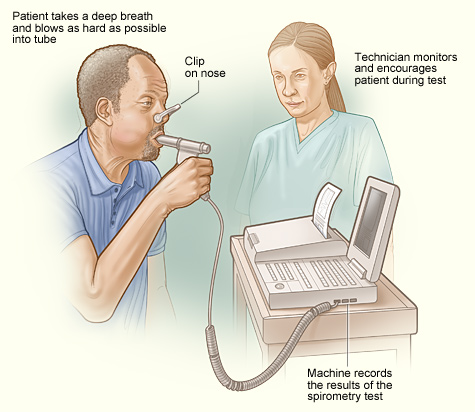 The treatment goal for the client with COPD are

Bronchodilator drug therapy are agents that widen the air passages by relaxing the bronchial smooth muscle and improve the ventilation of lungs. They are usually administered via inhalation route but in rare occasions may be given orally or administered intravenously. Regular treatment with long acting bronchodilators' is more effective and convenient than treatment with short acting forms.

It brings down swelling in the Lungs and opens up your airways. You might take it with a long-acting bronchodilator. Side effects include Diarrhea and weight loss.

Theophylline can help your lungs work better, but it may not control all of your symptoms.

These bring down swelling in your airways. You usually breathe them in through an inhaler.

Oxygen therapy O2 therapy is frequently used in the treatment of COPD another problem associated with hypoxemia.

Indications for us: Goals for 02 therapy are

To keep the SaO2 more than 90% during rest

A few changes to your daily life can also help you breathe easier.

Talk to a dietitian

You might need to eat smaller meals more often or take supplements to get the nutrients you need.

This is also important when you have COPD. It strengthens the muscles that help you breathe.

Bullae are enlarged airspaces that do not contribute to ventilation but occupy space in the thorax, these areas may be surgically excised

It involves the removal of a portion of the diseased lung parenchyma. this allows the functional tissue to expand. lung transplantation- is a surgical procedure in which a patient's diseased lungs are partially or totally replaced by lungs which come from a donor.

According to Fundamentals of Canadian Nursing, Rosenstock and Becker’s Health Belief Model is constructed with the assumption that a health-related action depends on the simultaneous occurrence of three factors-

B. Use of Nebulization

Anxiety related to acute breathing difficulties and fear of suffocation