Landmarks and Diameters of pelvis

Landmarks and Diameters of the pelvis-

It is the bony canal though which the fetus must pass during birth.it has a brim, a cavity and an outlet.

It is the part of the pelvis situated above the pelvic brim.it is formed by the upper flared-out portion of the iliac bones and protects the abdominal organs, but is no significance in obstetrics.

Bony landmarks are grooves or prominences found on bones, which help us to identify the location of other body structures like muscles. these are-

6 – Superior ramus of the pubic bone

7 – Upper inner border of the pubic

Diameters of Brim-It is the inlet of the pelvis which divides the pelvic cavity.

diameters are expressed as- 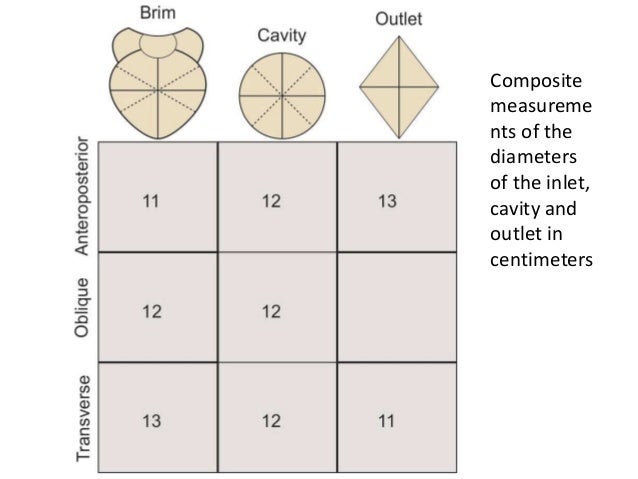 1 - Anteroposterior diameter- Is a line from the sacral promontory to the upper border of the symphysis pubis. and measures approximately 11 cm. It is also called the Obstetrical Conjugate.

The Anatomical or True conjugate- is measure from the promontory of sacrum to the center of the upper surface of the symphysis pubis and measures approximately 12cm.

The Diagonal conjugate-is also measured antero-posteriorly from the apex of the pubic arch of the symphysis to the sacral promontory.it measures about 1.25cm. more than the obstetric conjugate and may be felt during a vaginal examination as part of a pelvic assessment.

2 – Oblique diameter- is measured from one sacroiliac joint to the iliopectineal eminence on the opposite side of the pelvis. Measure about 12cm.

3 – Transverse diameter-it is between the widest points on the iliopectineal lines and measures approximately 13cm.

The Pelvic cavity – The cavity extends from the brim above the outlet below. The cavity is circular in shape and although it is not possible to measure its diameters exactly, they are all considered to be 12 cm.

The pelvic outlet-Two outlets are described the anatomical and the obstetrical.

Anatomical outlet – it bound anteriorly by lower border of symphysis pubis. laterally by ischial tuberosity, posteriorly by tip of coccyx.

1 - The anteroposterior diameter-is a line from the lower border of the symphysis pubis to the sacrococcygeal joint.it measures 13 cm. (during 2nd stage) in normal position it’s 2.5cm. less

2 – The transverse diameter – is a line between the two ischial spines and measures 10-11 cm. it is the narrowest diameter in the pelvis.

3 – The oblique diameter-in between the obturator foramen and the sacrospinous ligaments. about 12 cm.