Infection
An infection is the invasion of an organism’s body tissues by disease causing agents, their multiplication and the reaction of host tissues to the infectious agents and the toxins they produce.

The lodgement and multiplication of a parasite in the body is known as infection. Infections are caused by infectious agents (pathogens)-
These are-

2. Macro parasites (Worms or helminths)  Including nematodes such as parasitic roundworms and pinworm, tapeworms.

3. Arthropods such as –ticks, mites, fleas, and Lice.

2. Reinfection – Subsequent infection with the same parasite in the same host is called reinfection.

3. Secondary infection- When the body resistance is lowered by a pre-existing infectious disease, a new parasite sets up an infection.

4. Cross infection- When a patient already suffering from a disease acquires a new infection from another host or another external source. It is known as cross infection.

6. Iatrogenic infection- It is defined as physician induced infection resulting from drug therapy or investigative procedures.

8. Latent infection- Following infection, some parasites may remain in latent or hidden form in the host tissues and they proliferate and produce clinical disease when the host resistance is lowered, it is known as latent infection.

9. Atypical infection- in this, the characteristic clinical menifestations of
particular infectious disease are not present. 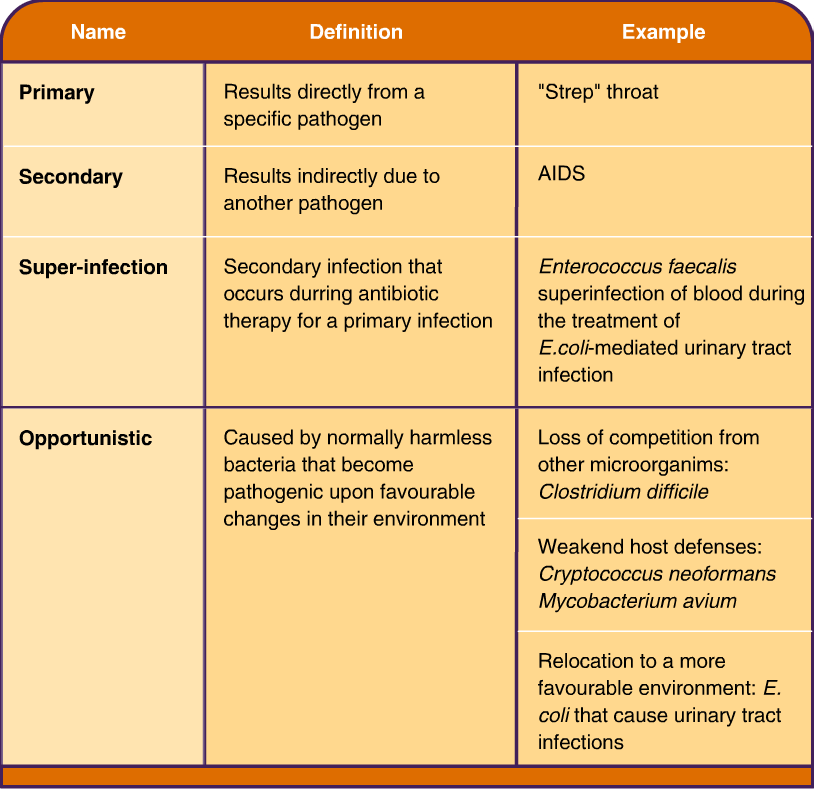 Source of infection may be – endogenous or exogenous source.

Endogenous source- Organism of normal flora are usually non pathogenic but occasionally they behave as pathogen outside their habitat. E.coli which are normal flora of intestine may cause UTI.

Exogenous source- Most of the infections are exogenous in origin. It includesa.

2. Modes of transmission- Pathogenic organism can spread from one host to another by a variety of mechanisms.
i. Contact
ii. Inhalation
iii. Ingestion
iv. Inoculation
v. Vectors
vi. Transplacental
vii. Iatrogenic and laboratory Infections 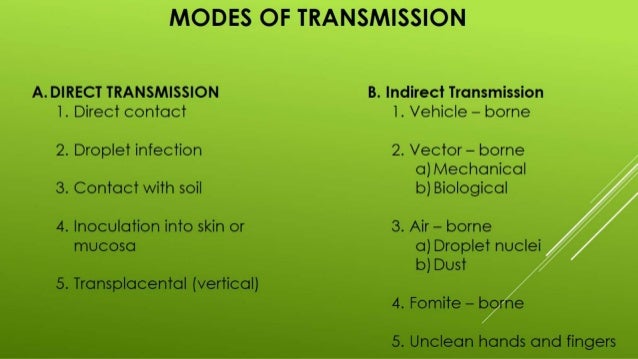 (a) Direct contact-STDs such as syphilis, gonorrhoea, herpex simplex
type 2 and AIDS are acquired by direct contact.

(b) Indirect contact-Some inanimate objects such as clothing, toys etc.
which may be contaminated by a pathogen and act as a vehicle for its
transmission.
Example- face towel shared by various persons may lead to spread of
trachoma.

(ii) INHALATION- Respiratory infections such as common cold, influenza, whooping cough and tuberculosis are acquired by inhalation of droplets.

(iii) INGESTION- Intestional infections like cholera, dysentery, food poisoning and most of the parasitic infections are acquired by ingestion of contaminated food or drinking water .

(iv) INOCULATION- It may be rabies virus is inoculated directly by bite of
rabid animal. cl.tetani spores deposited in to the host tissues following severe wounds leading to tetanus.
Iatrogenic when unsterile syringes and equipments are employed. ExampleHepatitis-B and HIV.

(vi) TRANSPLACENTAL- Some pathogens can cross the placental barriers and infect the foetus in utero. It is known as vertical transmission.

3. Susceptible host- The final link in the chain of infection is the susceptible host. Susceptibility of the host depends on genetic or constitutional factors, specific immunity and non- specific that affect an individual’s ability to resist infection or to limit pathogenicity.

TYPES OF INFECTIOUS DISEASES
Infectious diseases may be localised and generalised.

A. LOCALISED- There is an acute inflammatory reaction at the site of
invasion to arrest infection. When this process fails, the organism spread via lymph nodes (lymphadenitis) to regional lymph nodes and then to blood stream
(bacteraemia) which lead to dissemination of organism.

1. Bacteraemia- It is the circulation of bacteria in blood. Bacteraemia of a longer duration is seen during generalised infection as in typhoid fever.

2. Septicaemia- It is the condition where bacteria circulate and multiply in blood; form toxic products and cause high fever.

3. Pyaemia- It is a condition where pyogenic bacteria produce septicaemia with multiple abscesses in internal organs e.g. liver, spleen, kidney.

Note-Depending on the spread of infectious diseases in community, they may be classified as endemic, epidemic and pandemic.