a. The progress of labour with time

Descent: abdominal palpation of fifths of head felt above the pelvic brim.

b. The fetal condition

1.Normal- space felt between the edged of parital bone in the sagital suture.

2.Mild - the egde of parital bone comes very closer at the sagital suture.

3. Moderate- the edge of the parital bone over lap at sagital suture but can be easly separated

4. Severe- overlap of the bones and not separable.

The progress of labour 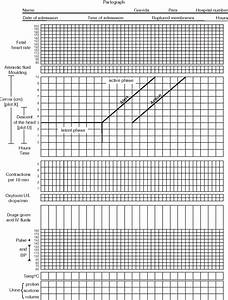 Transfer from latent to Active phase

1. The latent phase is from 0-2cm dilatation & is accompanied by gradual shortening of cencix. It should normally not last longer than 8 hrs.

2. The active phase is from 3-10cms & dilatation should be at the rate of at least 1cm/hr.

3. When labour progresses well, the dilatation should not move to the rt of the alert line.

4. When admission to hospital takes place in the active phase the cervical dilatation is immediately plotted in the alert line

5. When labour goes from latent to active phase plotting of the dilatation is immediately transferred from the latent phase to the alert line.

Key points on plotting the partograph