Bacterial are unicellular prokaryotic, microscopic organisms and the unit of measurement used for measuring bacteria is micron (1 micron or micrometre is one thousandth of a millimetre). They vary greatly in size. The size ranges from 0.1 micron to 2 microns in width and about 3 microns to 10 microns in length but filamentous forms may even exceed 100 microns.

Bacteria are of various shapes- These may be spherical, rod shaped, straight, slightly curved (comma shaped), branched, filamentous and I, V, L shaped (arranged like Chinese letters). Sometimes the length of the organism approximates the width of the organism.

The following six structures can be commonly seen in bacterial cell proceeding from outside inwards. 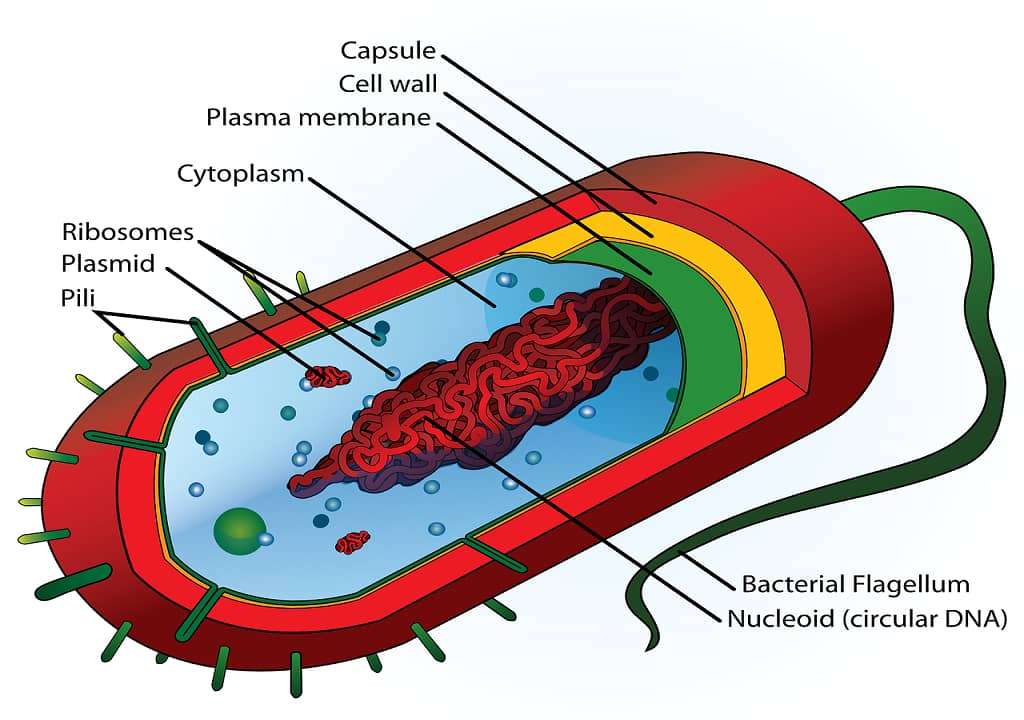 They are the organs of locomotion. It is 15-20nm hair like helical structure emerges from cell wall. They are fine hair-like protein fibrils attached to the cell in various locations and each flagellum originates from a basal granule. They are present in motile bacteria and in some spiral forms. The number and arrangement of flagella are characteristic for each bacterium.

Capsule is 0.2µm or more, visable under light microscope. Some bacterial cells are surrounded by a thick protective gelatinous layer known as capsule. It is concerned with the virulence of the bacterium, e.g. diplococcus pneumoniae Distinction between the cell wall and capsule is not always clear. When the capsule is in the form of a loose secretion, it is called a slime layer and if it is too thin it is known as microcapsule.

Macro-Capsule- Thickness of 0.2µm or more, visible under light microscope.

It is present just beneath the capsule or slime layer. It is tough, somewhat rigid and gives shape to the cell. It forms a rigid frame and protects the cell from damage. It varies in thickness, rigidity and in chemical composition. Gram positive bacteria have a simpler chemical composition as compared to Gram negative bacteria. Bacterial cell wall is composed of cellulose, protein and lipid.

The cell membrane in bacteria is very thin, weak, highly flexible and it is commonly called as cytoplasmic membrane. It is a thin layer lining the inner surface of the cell wall and separates it from the cytoplasm. It acts as a semipermeable membrane and controls the passage of nutrients and waste products into and out of the cell. Damage to this membrane results in leaking the vital material out of the cell and the cell ultimately dies. Chemically it consists of lipoprotein with a small amount of carbohydrate.

Inside the cell bounded by the cytoplasmic membrane is a clear watery substance called cytoplasm, which is slightly viscous and homogeneous in appearance. It is a colloidal system containing a variety of macromolecules (proteins, nucleic acid, polysaccharides and lipids), organic and inorganic solutes. Cytoplasm contains ribosomes, mesosomes, vacuoles and stored food granules viz. glycogen and volutin.

The nucleus of bacteria for a long time was a controversial structure. In the past, some considered the entire bacterial cell as a nucleus and others regarded the staining body in the centre as nucleus.

Feulgen stain reveals the presence of primitive form of nucleus in bacteria consisting of a long filament of deoxyribose nucleic acid (DNA) tightly coiled inside the cytoplasm. It represents the chromosome and is responsible for transmission of hereditary characters.

DNA replicates and is equally distributed among the daughter cells. A bacterial cell has no nuclear membrane or nucleous. An organised nucleus as found in animals and higher plants is absent in bacteria.

The basis of their shapes they are classified into three groups which are; cocci, bacilli and spirilli

These are spherical or oval in shape about 1 micron in diametre. Many bacteria of this form exhibit patterns of arrangement that are important for identification purposes and are characteristic of particular species of bacteria.

The bacteria are cylindrical or rod shaped. Generally, they occur as single unattached cells (microbacilli) and do not arrange themselves in the variety of patterns characteristic of cocci. Occasionally, they occur in pairs (diplobacili), chains (streptobacilli), Chinese letter pattern or in the form of branched filaments. 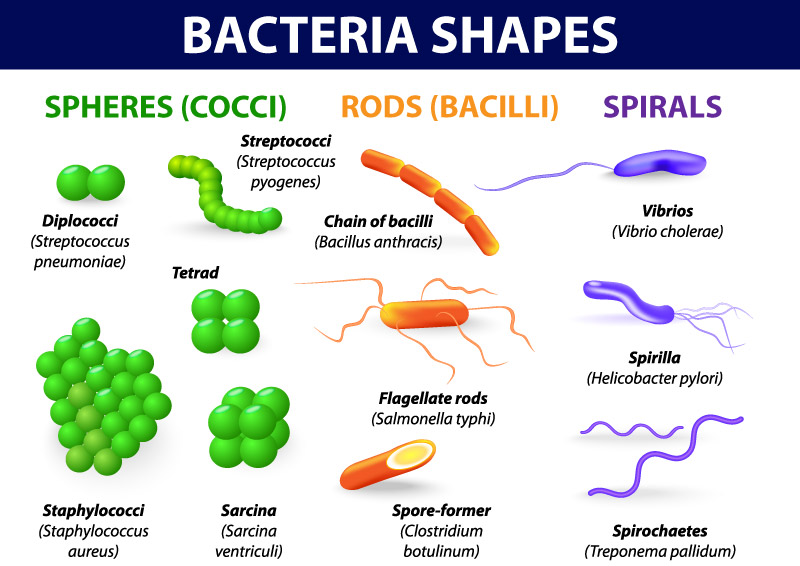 They are curved or spiral shaped motile bacteria. They occur mostly as unattached individuals found freely in water. The individual cells of different species show striking differences in length, number of coils and rigidity of cell walls.