The respiratory system is the set of organs that allows a person to breath and exchange oxygen and carbon dioxide throughout the body.

Exchange O2 with CO2 by simple diffusion over their entire body surface. Earthworms use their moist cuticle and insects have a network of tubes (tracheal tubes) to transport atmospheric air within the body. Special vascularised structures called gills are used by most of the aquatic arthropods and molluscs whereas vascularised bags called lungs are used by the terrestrial forms for the exchange of gases. Among vertebrates, fishes use gills whereas reptiles, birds and mammals respire through lungs. Amphibians like frogs can respire through their moist skin also. Left lungs- Divided into 2 Lobes by oblique fissure, Smaller than the right lungs.

Right lungs- Divided into 3lobes by oblique and horizontal fissure.

The diaphragm and a specialised set of muscles – external and internal intercostals between the ribs, help in generation of such gradients. Inspiration is initiated by the contraction of diaphragm which increases the volume of thoracic chamber in the antero-posterior axis. The contraction of external inter-costal muscles lifts up the ribs and the sternum causing an increase in the volume of the thoracic chamber in the dorso-ventral axis. The overall increase in the thoracic volume causes a similar increase in pulmonary volume. An increase in pulmonary volume decreases the intra-pulmonary pressure to less than the atmospheric pressure which forces the air from outside to move into the lungs, i.e., Inspiration.

Relaxation of the diaphragm and the inter-costal muscles returns the diaphragm and sternum to their normal positions and reduce the thoracic volume and thereby the pulmonary volume. This leads to an increase in intra-pulmonary pressure to slightly above the atmospheric pressure causing the expulsion of air from the lungs, i.e., Expiration.

Exchange of Gases-Alveoli are the primary sites of exchange of gases. Exchange of gases also occur between blood and tissues. O2 and CO2 are exchanged in these sites by simple diffusion mainly based on pressure/concentration gradient.

Solubility of the gases as well as the thickness of the membranes involved in diffusion are also some important factors that can affect the rate of diffusion. Pressure contributed by an individual gas in a mixture of gases is called partial pressure and is represented as pO2 for oxygen and pCO2 for carbon dioxide. a gradient is present for CO2 in the opposite direction, i.e., from tissues to blood and blood to alveoli.

Partial Pressures (in mm Hg) of Oxygen and Carbon dioxide-

As the solubility of CO2 is 20-25 times higher than that of O2, the amount of CO2 that can diffuse through the diffusion membrane per unit difference in partial pressure is much higher compared to that of O2. 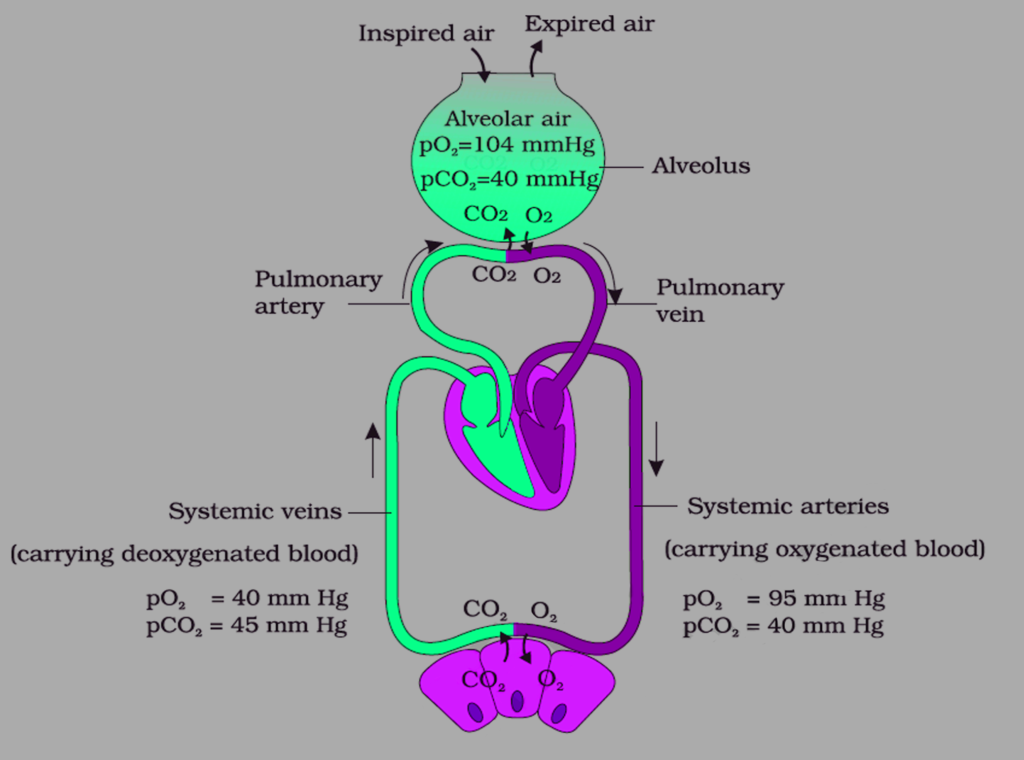 The diffusion membrane is made up of three major layers namely, the thin squamous epithelium of alveoli, the endothelium of alveolar capillaries and the basement substance in between them. However, its total thickness is much less than a millimetre. Therefore, all the factors in our body are favourable for diffusion of O2 from alveoli to tissues and that of CO2 from tissues to alveoli.

A sigmoid curve is obtained when percentage saturation of haemoglobin with O2 is plotted against the pO2. This curve is called the Oxygen dissociation curve and is highly useful in studying the effect of factors like pCO2, H+ concentration, etc., on binding of O2 with haemoglobin.

In the alveoli, where there is high pO2, low pCO2, lesser H+ concentration and lower temperature, the factors are all favourable for the formation of oxyhaemoglobin, whereas in the tissues, where low pO2, high pCO2, high H+ concentration and higher temperature exist, the conditions are favourable for dissociation of oxygen from the oxyhaemoglobin.

CO2 is carried by haemoglobin as carbamino-haemoglobin (about 20-25 per cent). This binding is related to the partial pressure of CO2. pO2 is a major factor which could affect this binding.

When pCO2 is high and pO2 is low as in the tissues, more binding of carbon dioxide occurs whereas, when the pCO2 is low and pO2 is high as in the alveoli, dissociation.of CO2 from carbamino-haemoglobin takes place, i.e., CO2 which is bound to haemoglobin from the tissues is delivered at the alveoli. RBCs contain a very high concentration of the enzyme, carbonic anhydrase and minute quantities of the same is present in the plasma too.