To social scientists, personality is the sum total of behavior, attitudes, beliefs, and values that are characteristic of an individual.

"Personality refers to deeply ingrained patterns – of behavior, which include the way one relates to, perceives, and thinks about the environment and one self"

The principal raw materials of personality physique, intelligence and temperament are the result of heredity. How they will develop will depend on environmental influences. Many aspects of human behavior and development ranging from physical characteristics such as height, weight, eye and skin color, the complex patterns of social and intellectual behavior, are influenced by a person's genetic endowment. 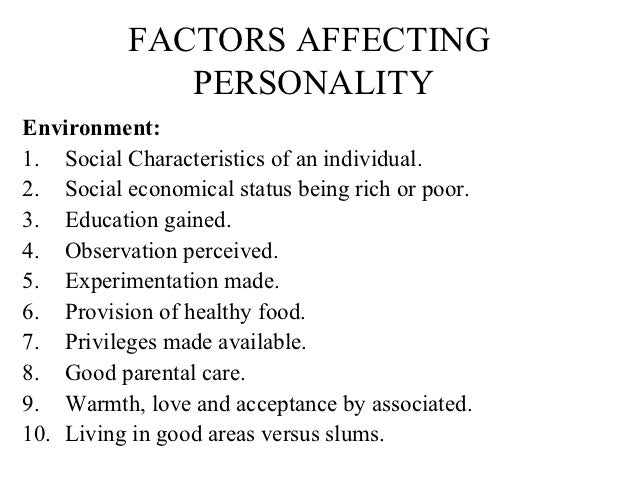 An individual with an imposing body-build and a healthy appearance definitely influences those around him. Even if he has not proved himself, yet he gains recognition and status through his physical appearance.

Teacher is the most powerful source of stimulation for the child. If he/she possesses desirable personal and social modes or reactions, he will inculcate them among his students. On the other hand, effects of prejudicial treatment on the part of teachers can make the child lose self-confidence and develop low self-esteem.

The number of siblings as well as their sex and age has a considerable influence on the development of both favorable and unfavorable personality traits like cooperativeness, sharing, aggressiveness, jealousy.

Peer group refers to other children of the same age who study with or play with the child. Peer group is much more influential than siblings or parents. The peer group serves as an important reference group in shaping personality traits and characteristics of the growing child.

Individuals of certain cultures are more generous, open-hearted and warm whereas individuals of some other cultures are suspicious, introverted and self-centered. It has also been found that certain cultural communities are more prone to develop certain abnormal behaviors as compared to others, probably due to the influence of geographical, dietary, hormonal or genetic influences within the community.

The children spend much of their time in the schools and hence it can play a very large part in the formation of the personality of the child. School will have direct role on child personality-