Immunization is of two types- 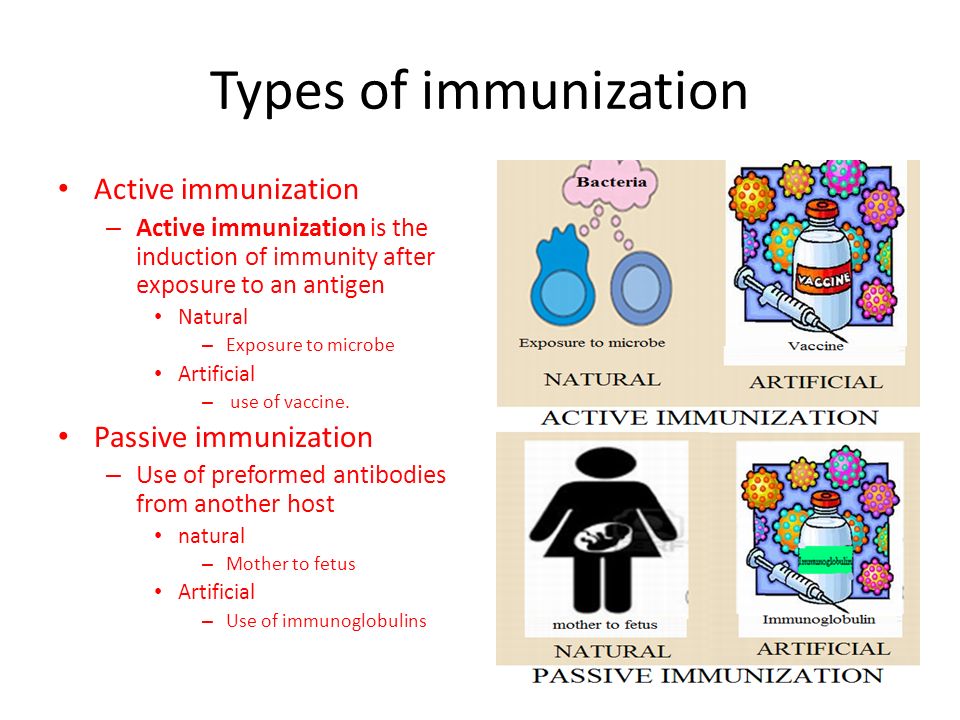 Passive immunization or immunity is produced without challenging the immune system of the body. It is done by administration of serum or gamma globulins from a person who is already immunized (affected by the disease) to a non-immune person.

Passive immunization is acquired either Naturally or Artificially.

Passive Natural Immunization Passive natural immunization is acquired from the mother before and after birth. Before birth, immunity is transferred from mother to the fetus in the form of maternal antibodies (mainly IgG) through placenta. After birth, the antibodies (IgA) are transferred through breast milk. Lymphocytes of the child are not activated. In addi tion, the antibodies received from the mother are metabolized soon. Therefore, the passive immunity is short lived. The significance of passive immunity that is obtained before birth is the prevention of Rh incompatibility in pregnancy.

Passive artificial immunization is developed by injecting previously prepared antibodies using serum from humans or animals. Antibodies are obtained from the persons affected by the disease or from animals, particularly horses which have been immunized artificially. The serum containing the antibody (antiserum) is administered to people who have developed the disease (therapeutic). It is also used as a prophylactic measure. Prophylaxis refers to medical or public health procedures to prevent a disease in people who may be exposed to the disease in a later period.

This type of immunity is useful for providing immediate protection against acute infections like tetanus, measles, diphtheria, etc. and for poisoning by insects, snakes and venom from other animals. It is also used as a prophylactic measure. However, this may result in complications and anaphylaxis. There is a risk of transmitting HIV and hepatitis.

Naturally acquired active immunity involves activation of immune system in the body to produce antibodies. It is achieved in both clinical and subclinical infections. Clinical infection is defined as the invasion of the body tissues by pathogenic microorganisms which reproduce, multiply and cause disease by injuring the cells, secreting a toxin or antigen-antibody reaction. During infection, the plasma cells produce immunoglobulins to destroy the invading antigens. Later, due to the activity of memory cells, body retains the ability to produce the antibodies against the specific antigens invaded previously.

Vaccine is a substance that is introduced into the body to prevent the disease produced by certain pathogens. Vaccine consists of dead pathogens or live but attenuated (artificially weakened) organisms. The vaccine induces immunity against the pathogen, either by production of antibodies or by activation of T lymphocytes. Edward Jenner produced first live vaccine. He produced the vaccine for smallpox from cowpox virus. Nowadays, vaccines are used to prevent many diseases like measles, mumps, poliomyelitis, tuberculosis, smallpox, rubella, yellow fever, rabies, typhoid, influenza, hepatitis B, etc.

Toxoid is a substance which is normally toxic and has been processed to destroy its toxicity but retains its capacity to induce antibody production by immune system. Toxoid consists of weakened components or toxins secreted by the pathogens. Toxoids are used to develop immunity against diseases like diphtheria, tetanus, cholera, etc. The active artificial immunity may be effective lifelong or for short period. It is effective lifelong against the diseases such as mumps, measles, smallpox, tuberculosis and yellow fever. It is effective only for short period against some diseases like cholera (about 6 months) and tetanus (about 1 year).