An episiotomy is the surgical incision made to enlarge the vaginal opening for delivery of the baby’s head. An episiotomy involves incision fourchette, the superficial muscles and skin of the perineum and the posterior vaginal wall.

It is an incision made into the thinned out perineal body to enlarge the vaginal orifice during delivery.

The incision begins in the centre of the fourchette and is directed posteriorly for approximately 2.5 cm in the midline of the perineum.

The incision begins in the centre of the fourchette and is directed posteriorly, i.e. made diagonally in a straight line, 2.5 cm away from the anus, i.e. at 7 o’clock position, if the anus is considered to be at 6 o’clock position.

The incision is begun one or more cm distant from the centre of the fourchette.

This incision starts about 1cm(0.4in) away from the centre of the fourchette and extends laterally. Drawbacks include the chance of injury to the Bartholin’s duct; therefore, some practitioners have strongly discouraged lateral incision.

The episiotomy has to be performed timely, when the perineum is bulging and 3-4 cm diameters of the fetal scalp is visible during a contraction. If episiotomy is performed early, it will fail to release the presenting part and there can be haemorrhage from cut vessels. If it is performed late, the procedure fails to prevent laceration and to protect the pelvic floor. 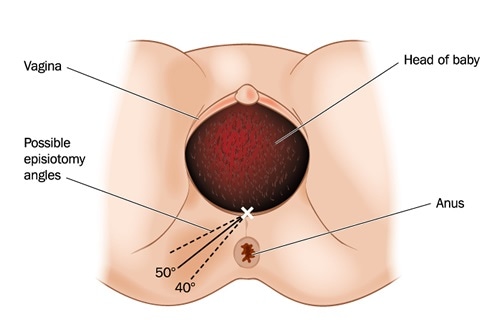 Perineal lacerations usually occur as the head is being born.  The perineum elongates and thins out and is liable to tear.  The extent of the laceration is defined on the basis of the depth.

Signs that the perineum is liable to tear-