Nervous system
Nervous system controls all activity of the body it is quicker than the other control system in the body like– endocrine system.
Primarily nervous system divided into 2 parts 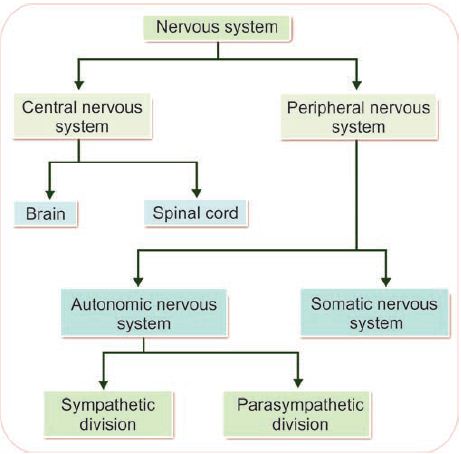 Brain and spinal cord are surround by 3-layers of meninges called.

A. Somatic nervous systems- it includes nerve supply and control movements of body.

B. A.N.S- it regulate function of visceral organ and vegetative function other name- vegetative or involuntary nervous systems. Again divided in two –

Neuron: – Neuron is defined as the structural and functional unit of the nervous system. Ti tis otherwise k/w nerve cell neuron is like any other cell in the body having nucleus and all the organelles in the cytoplasm.

However it is different from other cell by 2- ways

1. Neuron has branches of process called axon and dendrites.

2. Neuron does not have centrosome so it cannot undergo division (not regenerate) 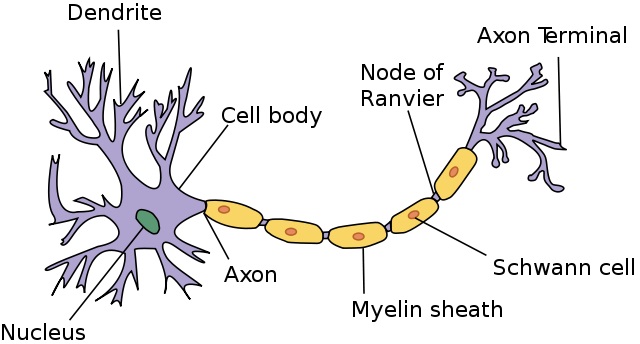 Classification of neuron: - Neurons are classified by 3- methods:-

1. Depending upon the number of poles:-

A. Unipolar neurons:- have only one pole. From single arise. This type cell present only in embryonic stage in human beings.
B. Bipolar neurons – neurons with 2-poles. Axon arises from one pole and dendrites arise from another pole.
C. Multipolar neurons- the neurons which have many poles. One of the poles gives rise to the axone and all other pole give rise dendrities.

2. Depending up on the funtions- 2 types

A. Motor neuron
B. Sensory neuron

3. depending upon the length of axon neuron are 2-type:-
a. golgi type- I neurons.
b. Golgi type- II neuron.

a. Golgi type- I neuron have long axons. The cell body of these neuron is in C.N.S and axons reach the remote peripheral organs
b. Golgi type- II – neurons of this type have short axons. These present in cerebral cortex and spinal cord.

Structure of neuron:- neuron is made up of 3 parts

Neuroglia
Neuroglia is the supporting cell of the nervous system. Neuroglia cells are non-excitable and do not transmit. Have impulse so these cells called nonneural cell.

c. Oligodendrocytes – these cells produce myelin sheath around the nerve fibers in C.N.S.

Receptors – receptors are sensory (afferent) nerve endings that give responses to the stimulas. When stimulated receptors produce a series of impulses, which are transmitted through the afferent nerves.

1. Exteroceptors – are the receptors which give response to stimli arising from outside the body. The 3-types of receptor
A. Cutaneous/ mechano receptors- these receptors situated in skin liketouch, pressure, pain

B. Chemoreceptors – receptors which give response to chemical stimule.

C. Telereceptors – these give response to stimuli arising away from the body. Like- vision, hearing.

2. Interoceptors- these receptors give response to stimuli arising within the body. These receptor 2-types

a. Visceroceptors – situated in the viscera. Like- stretch receptors- heart Baroreceptors- blood vessels.

b. Proprioceptors-this receptor give response to change in position of different parts of body.

a. Axosomatic synapse :- axmol one neuron end on some (cell body) of another neuron.

b. Axodendrite synapse – axon of one neuron end on dendrite of another neuron.

c. Axoaxonic synapse – axon of one neuron end on axon of another neuron.
2. Functional classification –

a. Metencephalon- formed by pones and cerebellum
b. Myelmchalone – medulla oblongata.

Introcuction:- the cerebral cortex is also called pallidum. In human beings, it has an area of 2.2 sqm. This is the largest part of the brain situated in the anterior and middle cranial fossa.

Lobes of the cerebrum :– each cerebral hemisphere card be further subdivided into 4-lobes. The lobes are named after the bones that cover them. Frontal, parital, temporal and occipital lobes. 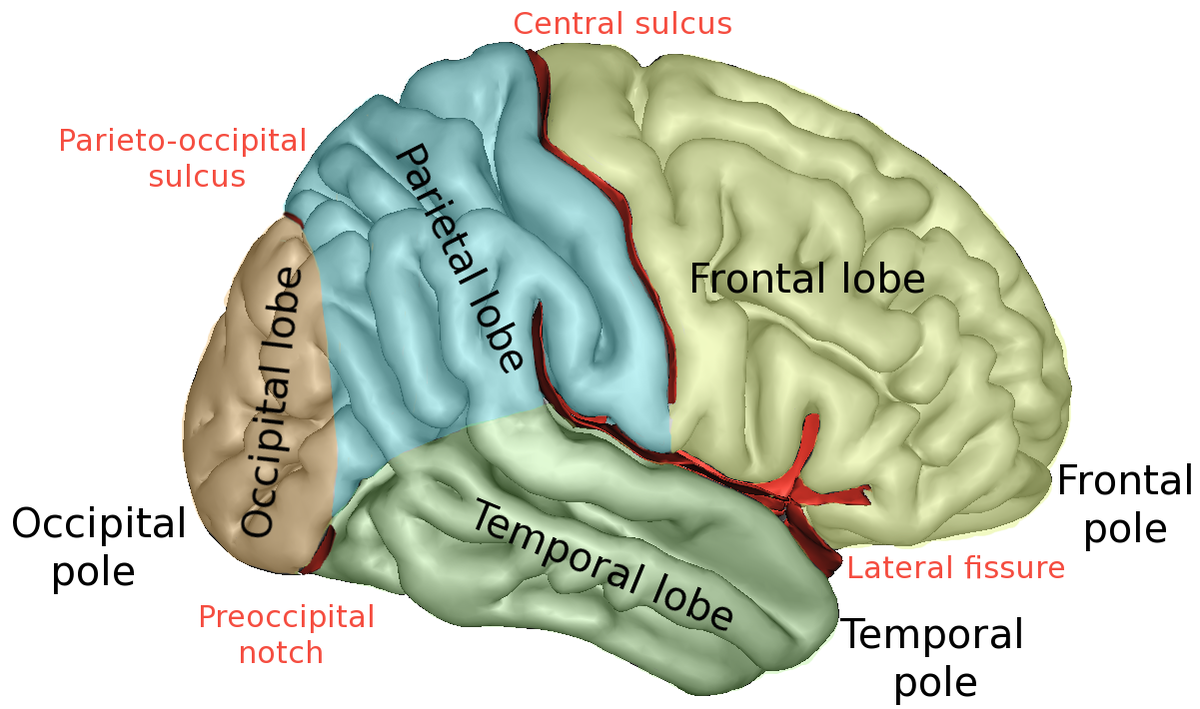 4→area no. 4 for initiation of voluntary movements

4s→(suppressor area) → is suppresses the extra impulses produce by area 4 and prevent exaggeration of movements.

Brainstem is the part of brain formed by medulla oblongata, pons and midbrain. Brainstem contains ascending and descending tracts between brain and spinal cord. It also contains many centers for regulation of vital functionsin the body.

Midbrain is the area of brain situated around the cerebral aqueduct between the cerebrum above and the pons below it consists of two parts:

a. Tectum-tectum is formed by two structures:-

Pons forms a bridge between medulla and midbrain. It is situated in front of the cerebellum, below the midbrain and above the medulla oblongata.

1. pons forms the pathway that connects cerebellum with cerebral cortex.

2. Pyramidal tracts pass through the pons

4. pons contains the pneumotaxic and apneustic centers for regulation of respiration.

6. Cranial nerve nuclei- nuclei of 12th, 11th, 10th, and some nuclei of 8th and 5th cranial nerves are located in the medulla oblongata.

The cerebellum is situated behind the pons and immediately below the posterior portion of the cerebrum occupying the posterior cranial fossa.

Two types of connective tissue coverings—bony vertebrae and tough, connective tissue meninges—plus a cushion of cerebrospinal fluid (produced in the brain) surround and protect the delicate nervous tissue of the spinal cord.

External Anatomy of the Spinal Cord

Plexuses :- there are following plexuses

Intercostal nerve- T2-T12 do not enter into the formation of plexuses and are known as intercostals or thoracic nerves.

Cerebrospinal fluid (CSF) is a clear, colorless liquid that protects the brain and spinal cord from chemical and physical injuries. It also carries oxygen, glucose, and other needed chemicals from the blood to neurons and neuroglia. CSF continuously circulates through cavities in the brain and spinal cord and around the brain and spinal cord in the  subarachnoid space(between the arachnoid mater and pia mater).
shows the four CSF-filled cavities within the brain, which are called ventricles.A lateral ventricle is located in each hemisphere of the cerebrum.
Anteriorly, the lateral ventricles are separated bya thin membrane, the septum
pellucidum.
The third ventricle is a narrow cavity. The fourth ventricle lies between the brain stem and the cerebellum. The total volume of CSF is 80 to 150 mL in an adult. CSF contains glucose, proteins, lactic acid, urea, cations(Na_, K_, Ca2_, Mg2_), and anions (Cl_ and HCO3_); it alsocontains some white blood cells.

Function of CSF:-
1. Mechanical protection. CSF serves as a shock-absorbing medium that
protects the delicate tissues of the brain and spinal cord from injury.
2. Chemical protection. CSF provides an optimal chemical environment for
accurate neuronal signaling.
3. Circulation. CSF allows exchange of nutrients and waste products between
the blood and nervous tissue.

Formation of CSF in the Ventricles
The sites of CSF production are the choroid plexuses, networks of blood capillaries in the walls of the ventricles. The capillaries are covered by ependymal cells that form cerebrospinal fluid from blood plasma by filtration and secretion. Because the ependymal cells are joined by tight junctions, materials entering CSF from choroid capillaries cannot leak between these cells. This blood–cerebrospinal fluid barrier permits certain substances to enter the CSF but excludes others, protecting the brain and spinal cord from
potentially harmful bloodborn substances

Note – CSF is reabsorbed as rapidly as it is formed by the choroid plexuses, at a rate of about 20 ml/hr (480 ml/day). Because the rates of formation and reabsorption are the same, the pressure of CSF normally is constant. Normal intracranial pressure is 5-15 mmHg.