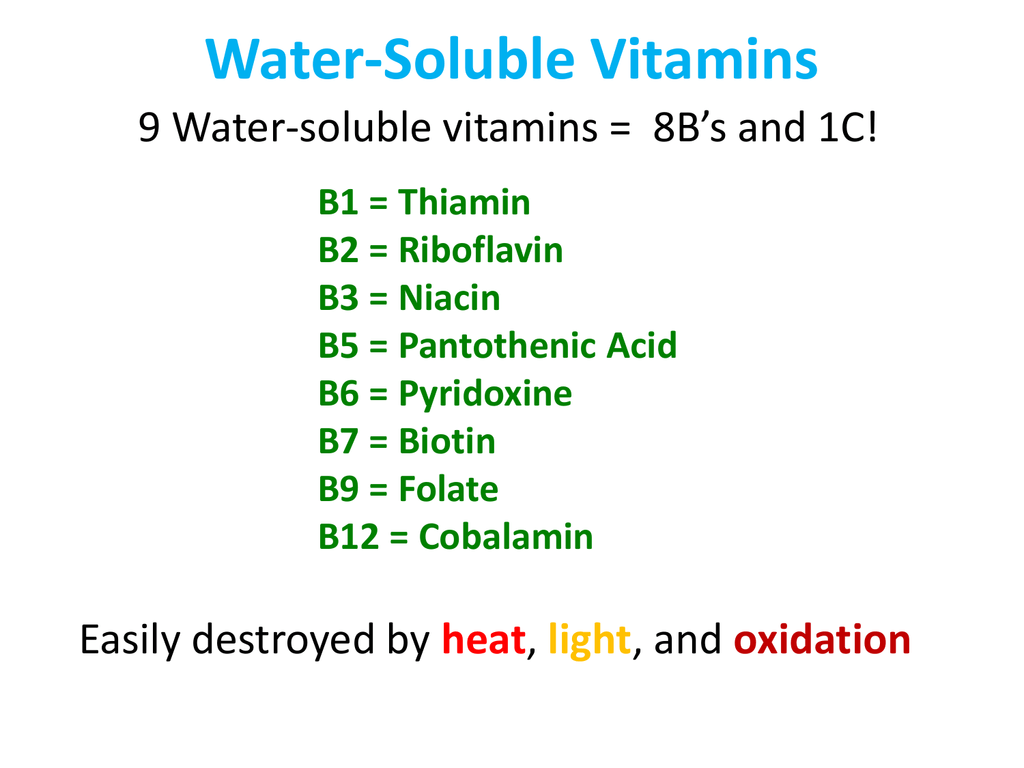 WATER-SOLUBLE vitamins consist of a large number of substances. These include ascorbic acid and the B-complex vitamins. The water-soluble vitamins are absorbed quickly in the body and the amounts not utilised are excreted in the urine.

Six members of this group, namely-

are included in the RDA, because definite requirements of these vitamins have been established through research. A diet, which provides adequate amount of these six vitamins, also, carries enough of the other members of this group.

Thiamine (also known as vitamin B1 and Aneurin) was first isolated in 1926 from rice polishings by Jansen and Donath.

The basic function of thiamine as a coenzyme is related to release of energy from glucose and its storage as fat, thus it makes energy available for normal growth and function of the body. Thiamine pyrophosphate, the coenzyme form of thiamine, is necessary for catalysing the oxidation of carbohydrates in the body.

Thiamine is needed to maintain normal function of three systems in the body, gastrointestinal, nervous and cardiovascular system.

Thiamine helps to produce energy needed for the cells of smooth muscles and secretory glands. In its lack, there is lack of muscle tone and deficient gastric secretions as a result there is poor appetite, indigestion, constipation and poor stomach function.

The central nervous system needs glucose as energy source for its function. When there is a lack of thiamine, the energy is not released and nerves are unable to work, with loss of response and alertness. The result is apathy, fatigue and irritability. If the deficit continues, nerve tissues may be damaged causing pain and finally paralysis.

If energy supply is not continuous, due to lack of thiamine, the heart muscle weakens and may lead to heart failure. The blood vessel walls become weak, the vessels may dilate and fluid may accumulate in the lower part of legs.

The recommended thiamine allowance is 0.5 mg per 1000 calories for all age groups.

It was isolated from yeast by Warburg and Christian. Kuhn and coworkers synthesised it in 1935. It was formerly known as vitamin B2 or vitamin G.

The name riboflavin is derived from its chemical structure. It is a yellow-green (Latin word ‘flavus’ means yellow) fluorescent pigment containing the sugar ‘ribose’, hence the name riboflavin.

Milk is a rich source of riboflavin. So also are products derived from milk such as yoghurt (curds), butter milk, milk powder and concentrated milk.

Riboflavin requirement is related to total energy requirements. For practical purposes the general RDA standard is based on 0.60 mg of riboflavin per 1000 kcal for all ages. Thus the recommended allowance varies from 0.7mg for an infant to 1.7 mg for an adolescent.

Goldberger in 1915 observed the existence of a pellagra-preventing factor, which he related to B vitamins. He found that the same factor cured black tongue in dogs.

Total niacin equivalent required daily on the basis of calorie requirement could range from 8 mg to 26 mg depending on the age and occupation of the individual.

Functions: - Vitamin B6 is a co-factor for several enzymes connected with the metabolism of amino acids. It is also believed to have a role in the formation of antibodies.

However, pulses, wheat and meat are known to be rich sources, while other cereals are fair sources. Vegetables and fruits are relatively poor sources.

The average requirement for adults would appear to be about 1.5 mg per day. Cooking losses in normal Indian diets are negligible; hence no allowances for losses need be made. The suggested daily intake varies from 0.4 mg for infants to 2.0 mg for adults and 2.5 mg for expectant and nursing mothers

The symptoms of vitamin B6 deficiency—such as peripheral neuritis, anaemia, glossitis, cheilosis and seborrhic dermatitis are similar to those of other B vitamins.

Folic acid and related compounds, which is one of the B vitamins, was discovered in 1941, It was found to be essential for all vertebrates including man. Its name was derived from the Latin word folium, which means leaf, because it was first isolated from spinach leaves and is widely distributed in green, leafy plants.

It is widely distributed in foods. Green leafy vegetables, liver, legumes and yeast are rich sources of folic acid. It is a relatively stable vitamin but storage and cooking losses can be as high as 50 per cent, especially if cooking water is discarded.

The safe level of folate intake would be 100 mcg per day for adults and adolescents with 25 mcg in infancy increasing to 40 mcg at pre-school stage, gradually increasing with age to 100 mcg of folates at adolescence.

Vitamin B12 or cyanocobalamin was the last member of the B vitamins discovered in 1948. It contains cobalt and phosphorus and is red in colour. It is found only in animal foods and higher plants are unable to synthesise it.

The richest sources are liver, and organ meats. Milk, eggs, muscle meat and fish are good sources. Plant foods do not contain vitamin B12.

Ascorbic acid (vitamin C) was isolated and its chemical structure elucidated in 1932 by C.G. King. Its lack in human diet has long been known to cause a disease called scurvy.

The recommended daily allowance increases with age from 20 to 40 mg for children and is 40 mg per day for adult. An intake of 80 mg per day is recommended for a nursing mother.