Viruses may be defined as extremely small obligate intracellular living forms containing only one type of nucleic acid either DNA or RNA. Earlier they were called ‘ultramicroscopic viruses’ because they could not be seen with light microscope. They were also called ‘Filterable Viruses’, since they pass through very fine filters which hold the bacteria back. Now they are simply called ‘viruses’. A mature virus particle is called ‘virion’.

Virus is a Latin word meaning ‘poison’ or ‘venom’. It was generally believed that the ‘viruses’ or poisons were carried in the night air and cause many unexplained diseases.

The viruses deserve special consideration in our survey of distinctions between living and non-living matter because they show characteristics of both.

All viruses are extremely small and cannot be seen with a compound microscope. The following three basic techniques are used to determine the size of virus-

Viruses, like other microorganisms, vary in shape. The shape remains constant for any particular kind of virus but varies from one type of virus to another. These may be spherical, rod shaped, cuboidal, rhomboidal (multisided), needle shaped etc. Rabies virus is bullet shaped, TMV is rod shaped, polio virus is spherical, pox virus is rectangular or brick shaped. Some viruses are irregular in shape. Bacteriophages have head and tail like sperms.

Viruses have a relatively simple structure as compared to other living things. Virus particle is called virion, which consists of two parts viz. the central core or nucleic acid core and protein coat. 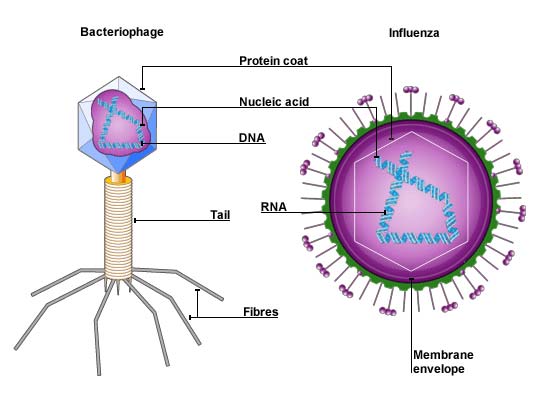 The Central Core or Nucleic Acid Core- It may be either ribonucleic acid (RNA) or deoxy ribo-nucleic acid (DNA). Plant viruses contain RNA while animal viruses have DNA or RNA. The two together are never found in a virus.

The Protein Coat- The protein coat covers the central core and is called capsid. The capsid itself is formed of a number of subunits known as capsomeres. Some viruses are surrounded by an envelope which is lipoprotein in nature as seen in herpes virus, pox virus, rabies virus etc.

Envelope may have protein subunits, projecting on its surface which are called peplomeres. A virus may have more than one type of peplomere as in Influenza virus which contain two types of peplomeres . If there is no envelope surrounding the virion, it is called as naked virion.

The viruses that infect bacteria are called ‘bacteriophages’ or ‘phages’. They are so named because they destroy bacteria (phage, i.e. eat). They are usually present in polluted waters, soils, decaying plants and in the discharges (urine/faeces) of humans and other animals. They are frequently found in old cultures of bacteria. Bacteriophages differ from other viruses only in their choice of host cells.

Bacteriophage has two distinct parts, namely, hexagonal head and a cylindrical tail. The head in its central portion contains DNA surrounded by a protein coat or capsid. The tail consists of a hollow tube surrounded by a contractile sheath. The tail at its base has a base plate which is connected with six long thin tail fibres. The most extensively studied group of bacteriophage is T series that invade the non-motile strain of Eschierichia coli. T series bacteriophages are of fairly large size and easy to culture and purify.