The series of movements that occur on the head in the process of adaptation during its journey through the pelvis is called mechanism of labor.

The principal movements are-

Passage of the widest diameter of the presenting part to a level below the plane of the pelvic inlet. The sagittal suture lies more posteriorly with the result that the anterior parietal bone becomes the leading presenting part and is then called anterior parietal presentation or anterior asynclitism. In primigravidae, engagement occurs in a significant number of cases before the onset of labor while in multiparae, the same may occur in late first stage with rupture of the membranes.

Downward passage of the presenting part through the pelvis. It is slow or insignificant in first stage but pronounced in second stage. It is completed with the expulsion of the fetus. In primigravidae, with prior engagement of the head, there is practically no descent in first stage; while in multiparae, descent starts with engagement. 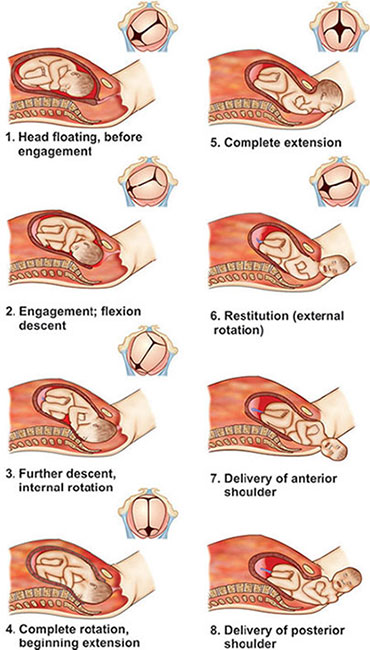 Flexion of the fetal head occurs passively as the head descends due to the shape of the bony pelvis and the resistance offered by the soft tissues. The head meets the resistance of the birth canal during. In Occipitolateral position, there will be anterior rotation by two-eighths of a circle of the occiput. whereas in oblique anterior position, rotation will be one-eighth of a circle forward, placing the occiput behind the symphysis pubis. There is always an accompanying movement of descent with internal rotation. Thus, prerequisites of anterior internal rotation of the head are well-flexed head, efficient uterine contraction, favorable shape at the midpelvic plane, and tone of the levator ani muscles. descent, full flexion is achieved. Thus, if the pelvis is adequate, flexion is achieved either due to the resistance offered by the unfolding cervix, the walls of the pelvis or by the pelvic floor. Flexion is essential for descent, since it reduces the shape and size of the plane of the advancing diameter of the head.

Rotation of the presenting part from its original position to the anterior position as its passes through the pelvis. Internal rotation is a turning forward of whatever part of the fetus reaches the gutter shaped pelvic floor first.

Theories which explain the anterior rotation of the occiput are-

After internal rotation of the head, further descent occurs until the subocciput lies underneath the pubic arch. At this stage, the maximum diameter of the head (biparietal diameter) stretches the vulval outlet without any recession of the head even after the contraction is over— called “crowning of the head”.

It is the visible passive movement of the head due to untwisting of the neck sustained during internal rotation. Movement of restitution occurs rotating the head through one-eighth of a circle in the direction opposite to that of internal rotation .The occiput thus points to the maternal thigh of the corresponding side to which it originally lay.

It is the movement of rotation of the head visible externally due to internal rotation of the shoulders. As the anterior shoulder rotates toward the symphysis pubis from the oblique diameter, it carries the head in a movement of external rotation through one-eighth of a circle in the same direction as restitution. The shoulders now lie in the anteroposterior diameter. The occiput points directly toward the maternal thigh corresponding to the side to which it originally directed at the time of engagement.

After the shoulders are positioned in anteroposterior diameter of the outlet, further descent takes place until the anterior shoulder escapes below the symphysis pubis first. By a movement of lateral flexion of the spine, the posterior shoulder sweeps over the perineum. Rest of the trunk is then expelled out by lateral flexion.