Immunity is defined as the capacity of the body to resist pathogenic agents. It is the ability of body to resist the entry of different types of foreign bodies like bacteria, virus, toxic substances, etc

Immunity is of two types-

Innate immunity is the inborn capacity of the body to resist pathogens. By chance, if the organisms enter the body, innate immunity eliminates them before the development of any disease. It is otherwise called the Natural or Non-specific immunity.

This type of immunity represents the first line of defence against any type of pathogens. Therefore, it is also called non-specific immunity. 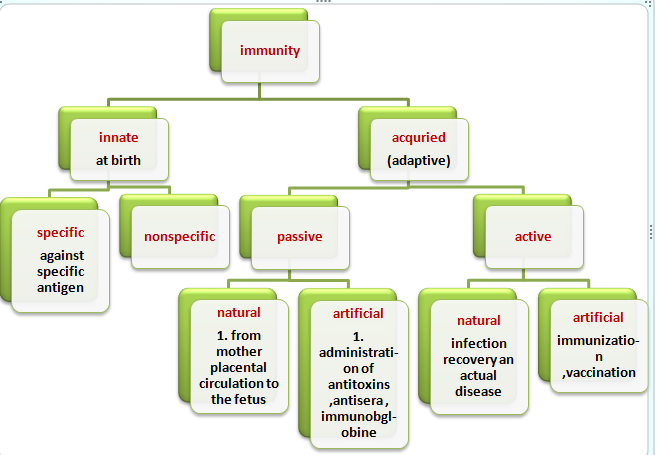 Acquired immunity is the resistance developed in the body against any specific foreign body like bacteria, viruses, toxins, vaccines or transplanted tissues. So, this type of immunity is also known as specific immunity.

It is the most powerful immune mechanism that protects the body from the invading organisms or toxic substances. Lymphocytes are responsible for acquired immunity.

Lymphocytes are responsible for the development of these two types of immunity.

The two categories are-

Thymus secretes a hormone called thymosin, which plays an important role in immunity. It accelerates the proliferation and activation of lymphocytes in thymus. It also increases the activity of lymphocytes in lymphoid tissues. 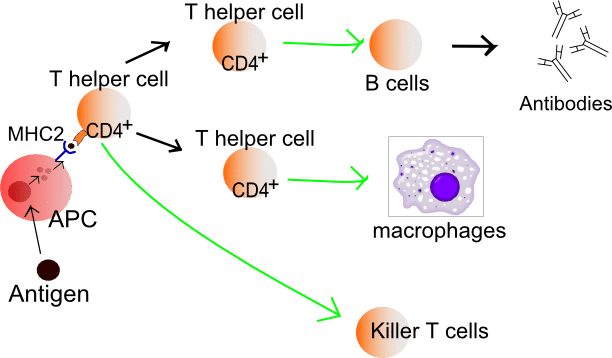 Helper T cells (CD4 cells) which enter the circulation activate all the other T cells and B cells. Normal, CD4 count in healthy adults varies between 500 and 1500 per cubic millimeter of blood.

TH1 cells are concerned with cellular immunity and secrete two substances: i. Interleukin-2, which activates the other T cells. ii. Gamma interferon, which stimulates the phagocytic activity of cytotoxic cells, macrophages and natural killer (NK) cells.

2. Cytotoxic T cells or killer T cells. These cells are also called CD8 cells because of the presence of molecules called CD8 on their surface.

Cytotoxic T cells that are activated by helper T cells, circulate through blood, lymph and lymphatic tissues and destroy the invading organisms by attacking them directly.

Other Actions of Cytotoxic T Cells

The memory cells migrate to various lymphoid tissues throughout the body. When the body is exposed to the same organism for the second time, the memory cells identify the organism and immediately activate the other T cells. So, the invading organism is destroyed very quickly. The response of the T cells is also more powerful this time.

After the transformation, all the types of T lymphocytes leave the thymus and are stored in lymphoid tissues of lymph nodes, spleen, bone marrow and GI tract.

Types of B Lymphocytes After processing, the B lymphocytes are transformed into two types:

Role of Memory B cells-

Memory B cells occupy the lymphoid tissues throughout the body. The memory cells are in inactive condition until the body is exposed to the same organism for the second time. During the second exposure, the memory cells are stimulated by the antigen and produce more quantity of antibodies at a faster rate, than in the first exposure. The antibodies produced during the second exposure to the foreign antigen are also more potent than those produced during first exposure. This phenomenon forms the basic principle of vaccination against the infections

Storage of B Lymphocytes-

After transformation, the B lymphocytes are stored in the lymphoid tissues of lymph nodes, spleen, bone marrow and the GI tract.